It is Chinese food.

Yakisoba is Chinese food.”Yakisoba” is “Chow mein” which the history of Chinese 4,000 years produced.It turns into Japanese food all too soon.The Japanese people ate “Chow mein” for the first time and had Japanese food in excessive taste.

Speaking of Pink food, I associate a peach and a strawberry.But I who am a Japanese associate only another one.It is cod roe.Cod roe is said to be “Mentaiko” in Japan.In Japan, ‘Menta’ means cods and ‘Mentaiko’ means cod roe as ‘Ko’ means a child or children.

The Japanese as a whole are a rice-eating nation.Japanese food is the rice.The rice has several good friends.The one in the friend is Mr.Salted Squid Guts.I think that he is gross.When I watched him for the first time, I mistook it for a slug.My father drank sake with him.

I have a slight anemia since I was young.When a seat rises at a hot place, I feel dizzy.Therefore my parents fed me the iron content-rich food.Milk, Spinach, Lever of a chicken and the cow, etc.I was bad at anything.It was Hijiki that I was hard for to deal with in that. 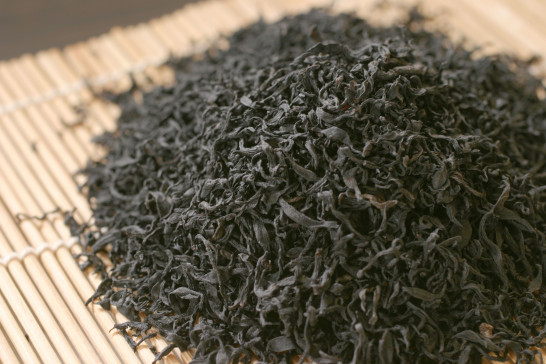 This photo is Hijiki. 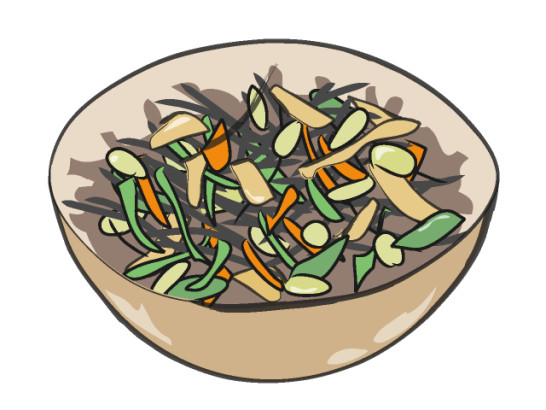 This photo is Hijiki picture1.

As a diet food

Hijiki has high popularity as a diet food in Japan.Especially, due to abundant dietary fiber, iron, calcium, etc. contained in kelp, it is popular as a diet food.They boil Hijiki with soy sauce in Japan and eat.I became an adult and understood a taste of Hijiki no nimono. 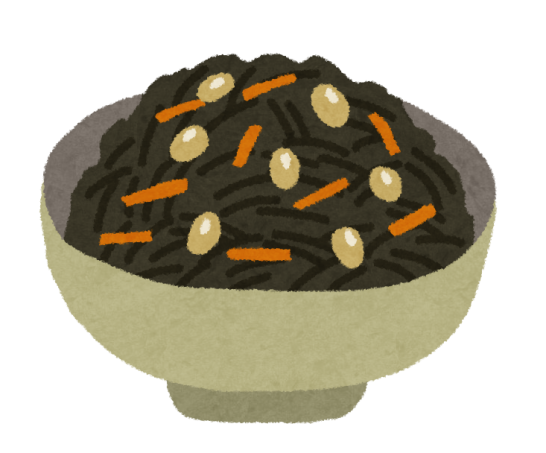 This photo is Hijiki picture2. 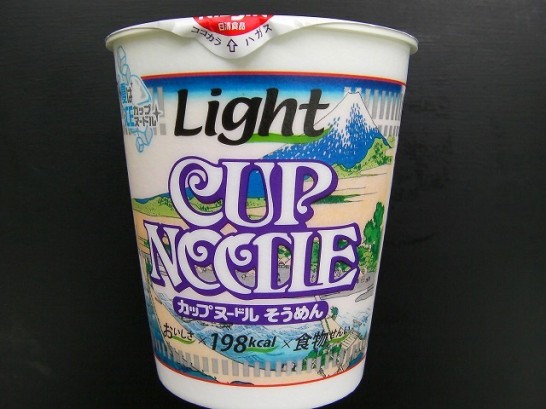 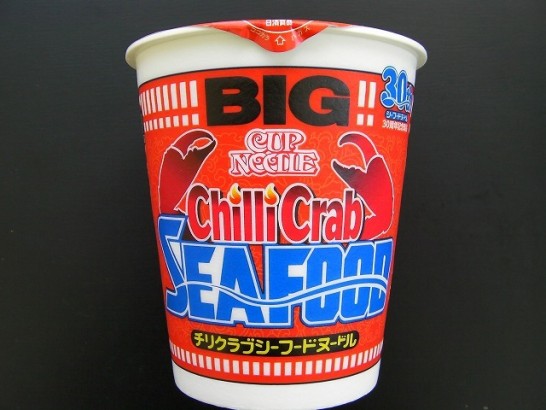 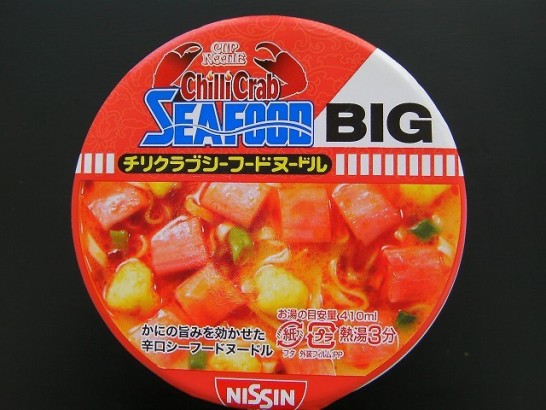 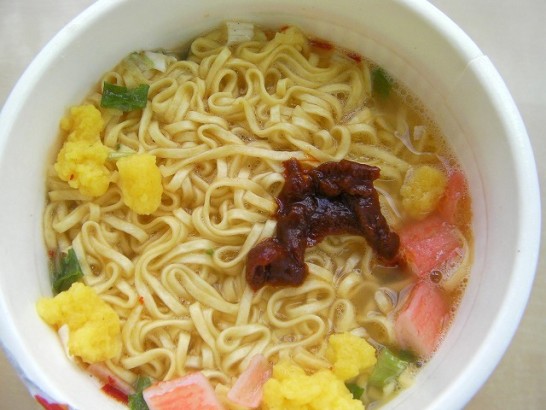 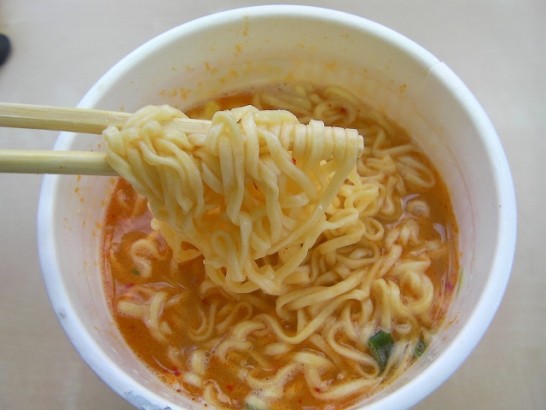 Japan is seaweed culture.There is a company of seaweed founded in 1690 in Japan.The company owns a building in the excellent location in Tokyo.It is the same as owning a building in Fifth Avenue of New York.Japanese loves seaweed. 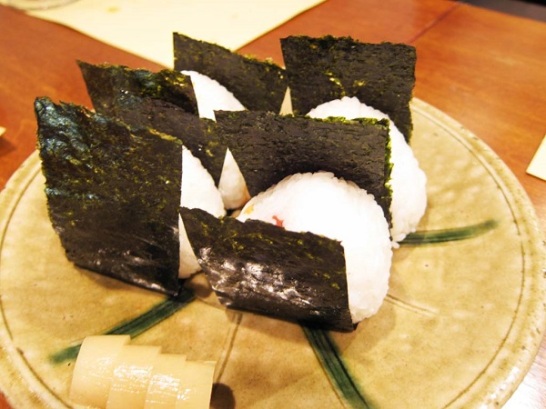 Not appointed to a world heritage 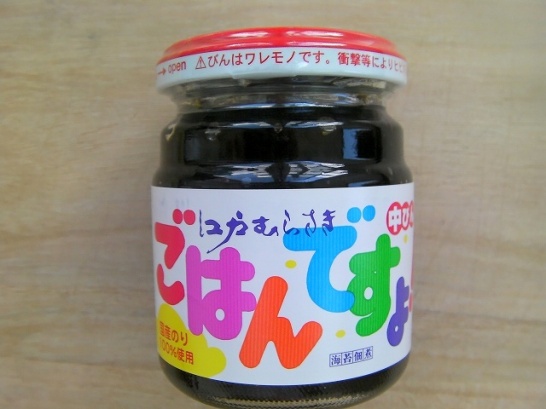 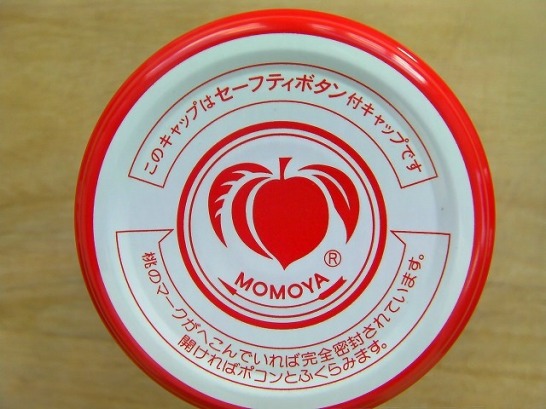 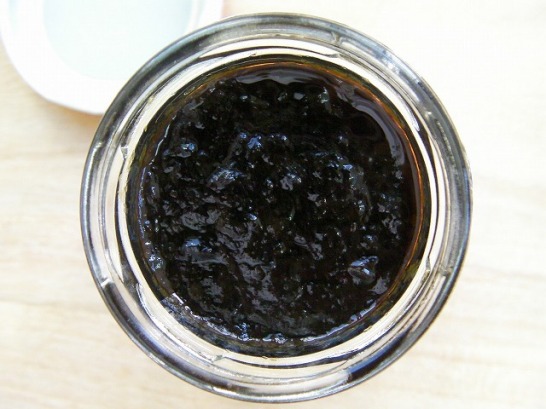 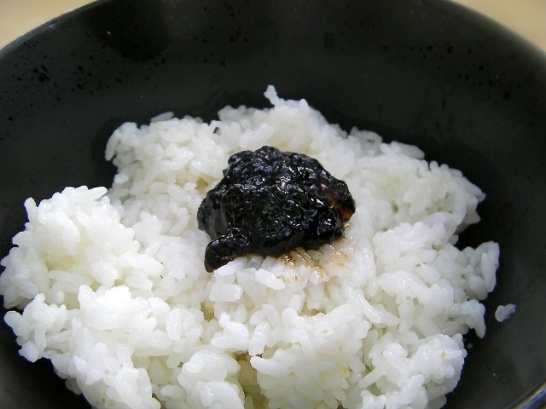 It is Rice’s friend in Japan, but turns into Bread’s friend in your country.Spread butter on bread and spread “Gohandesuyo” on and eat.It is a devil visually.This regards me as the essence of the Japanese food.Please watch Bread’s friend video. 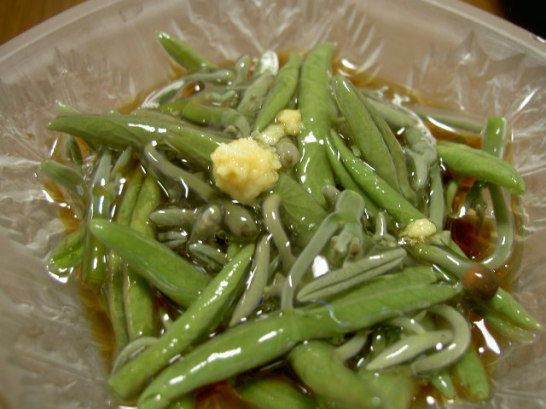 I enjoy a texture by Water shield.It is a bit thin taste.Some people looks like frogspawn and dislike it.Water shield is suitable for diet.Water shield is comprised of water in most.Therefore you do not gain weight even if you eat a lot it. 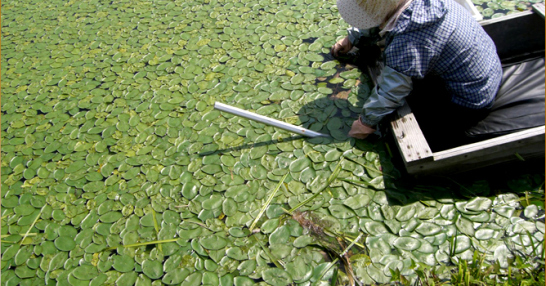 Rince the Water shield for 2,3 times.Boil it.Cool with ice water.Eat it with Wasabi soy sauce.This recipe is the simplest and is the most yummy.Let’s eat water shield if you are on a diet. 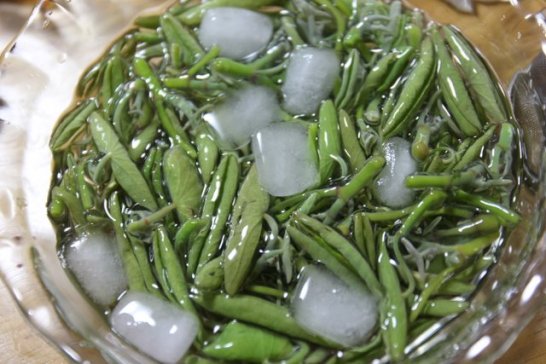 Even if people in Japan, there are few opportunities to eat it.It is a local specialty in Okinawa.Do you know Okinawa?Located at the southwestern tip of Japan, Okinawa is a subtropical prefecture that consists of over 160 islands.It is a popular island resort. 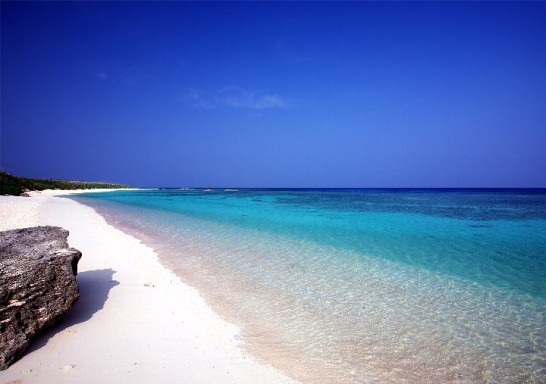 It is seaweed caught in Okinawa.The name is ‘Sea grapes’.The scientific name is ‘Caulerpa lentillifera’.It is called Sea caviar from the form.In old days, only people in Okinawa ate it.However, it spread out in the all over Japan because it was very delicious.There are few edible people because there is little amount of production. 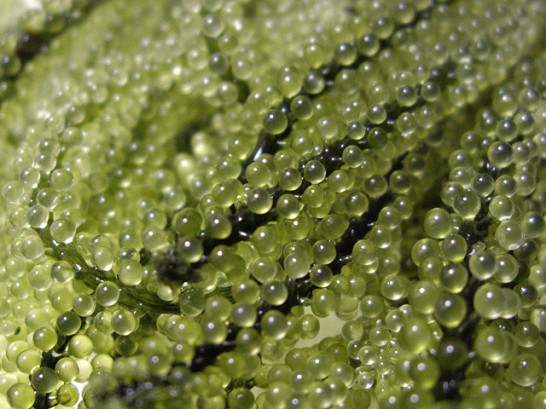 Sea grapes is rich in minerals.The mineral is necessary for us.On a diet, we lack of the mineral.Sea grapes compensate for lack of mineral.Besides, that has low calories.Please eat it if there is the opportunity when you go to Okinawa. 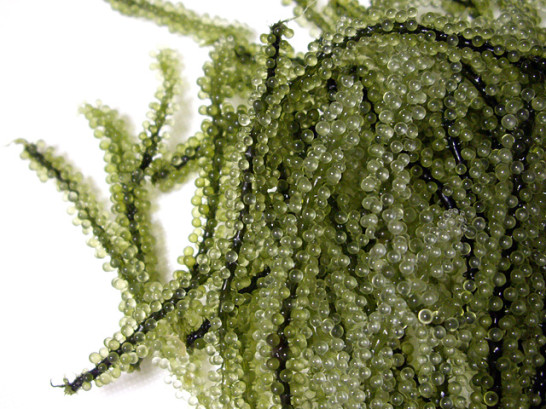 Nemacystus decipiens is called “Mozuku” and is written “Water Cloud(水雲) in Japan.Mozuku is a kind of edible seaweed like nori which looks like a lot of brown slimy threads, and tastes quite nice and slick.It is often served as a ingredients with Japanese food.Today, I introduce the recipes of Nemacystus decipiens soup. 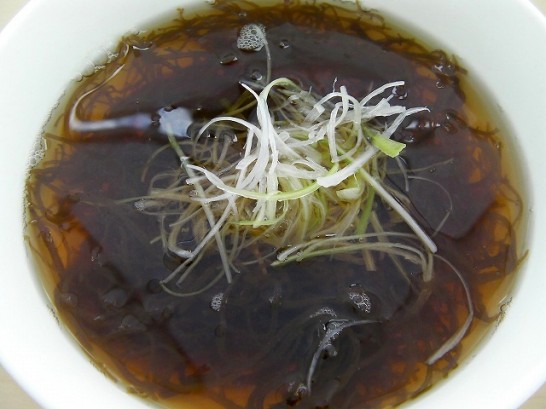 I have quitted smoking on a diet.I felt the need to put something in my mouth.I felt that I wanted to always eat between meals.But it was not made because I was on a diet.For me, it was hell.I remembered the afternoon snack that I ate in childhood in such a case.It is so Miyako Konbu -KELP-. 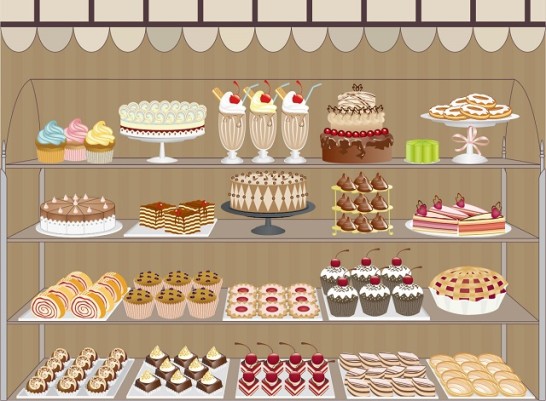 Kelp is rich in calcium and dietary fibers.Besides, it is a healthy food.When it is made soup stock with the Japanese food mainly, it is used, but I eat by afternoon snack.Kelp name is Miyako Konbu.It is classic afternoon snack. 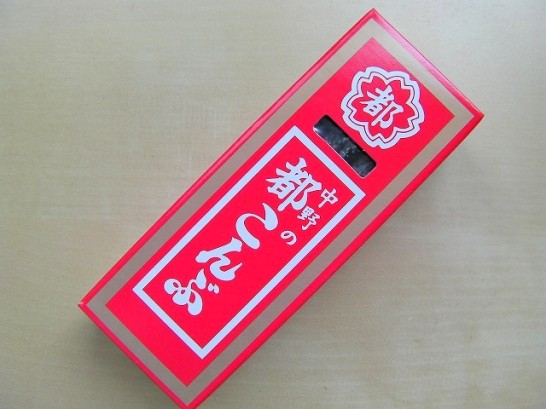 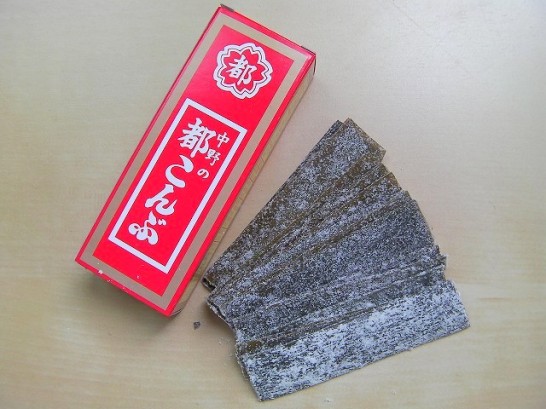 Seaweed is one of the selected species of the 100 worst invasive foreign species (IUCN, 2000).However, the Japanese eats such Invasive foreign species willingly.WA・KA・ME.It is often used as an ingredient in soup dishes, such as miso soup.The seaweed wakame has abundant dietary fibers and is the ingredients which are most suitable for diet.And it is said that the seaweed wakame is good for baldness. 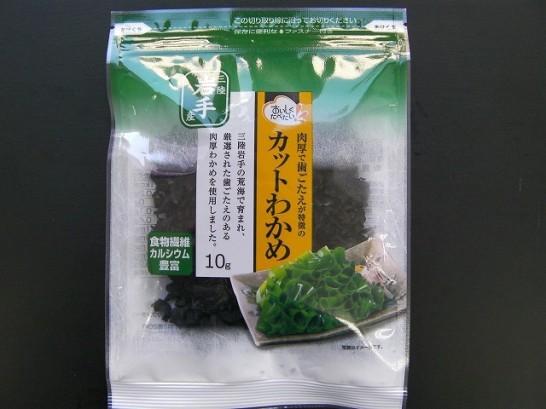 It is nothing less than an invasion.

The upper photograph is Dried precut wakame seaweed.It is sold in a supermarket of wherever in Japan.It increases to several times when You soak it into water.It is very functional and its ingredients having high convenience.The state to increase is nothing less than an invasion.But the Japanese say that “it is delicious”, and they eats this. 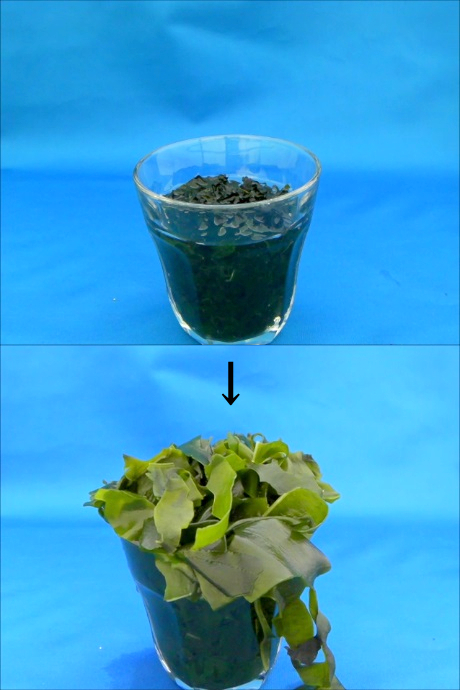 Video of the invader